The History of Polycarbonate Windshields 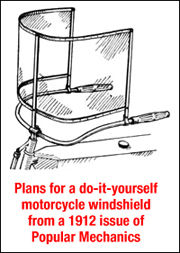 Not long after the first motorcyclist rode down the unpaved highway of history, some clever rider came up with the idea of a motorcycle windshield... probably for protection against the ravages (and manure) of early rural roads.

There is little recorded information on the appearance of the very first motorcycle windshield, but early European road racers often employed a small flyscreen made from a material the British referred to as Perspex. These were some of the earliest uses of the new polymethyl methacrylate (PMMA) plastic, developed in Germany by Rohm and Haas in 1928. This same material would later be marketed under names such as Plexiglas™, Acrylite™, and Lucite™.


In the 1930s and 40s, motorcycle windshields became popular, especially on large touring bikes. Early screens were made from materials like butyrate (cellulose acetate butyrate) and DuPont's Pyralin (cellulose nitrate). Both of these materials, however, were subject to chemical degradation from sun and weather, and these windshields quickly turned yellow and became flimsy. Wire frame stiffeners and PVC beaded edges were then added to extend the life of the average motorcycle windshield.

By the mid 1960s, windshields made from acrylic plastic material, such as Acrylite® and ICI Lucite®, became the standard in the motorcycle industry. Acrylic plastic had excellent clarity and optics, and was much stronger than a cellulose windshield. But when an acrylic windscreen broke, it shattered into razor-sharp, flesh-eating shards of plastic. For that reason, many riders stuck with their old yellow Pyralin windshields.

Soon after, the same material was used to develop a direct replacement screen for the popular BMW® R100RT, which led to recognition by BMW North America for outstanding product development.

The rest, as they say, is history.

But however impact-resistant polycarbonate is, its naturally soft surface must be hardcoated (polymerically glazed) to have sufficient abrasion resistance for use as a motorcycle windshield. GE's original FMR hardcoated polycarbonate had 3X the abrasion resistance of acrylic material, and it became the motorcycle industry standard until National Cycle made a "quantum" leap in hardcoating technology. Their exclusive Quantum® hardcoating, developed in 2004, offered scratch resistance 10X greater than FMR and 30X greater than acrylic. Quantum is the new state-of-the-art for windshield hardcoating.

The reason is that acrylic (and even High Impact Acrylic or "aircraft plastic") will shatter under moderate impact, often resulting in injury to the rider.

In that respect, National Cycle's introduction of polycarbonate windshields was an innovation in motorcycle safety as well as durability.

National Cycle® and ZTechnik® windscreens and fairings are designed to provide wind protection and increased riding comfort, but not protection in the event of a collision with another vehicle, an animal, or any other object.